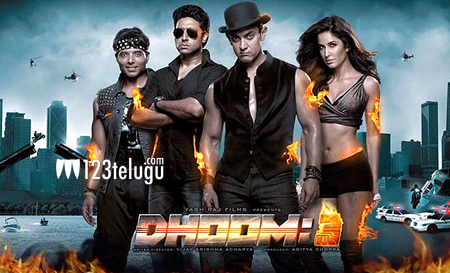 Dhoom 3 is the latest film with Bollywood top stars Aamir Khan, Abhishek Bachchan and Katrina Kaif in the lead roles. The shooting of the movie has been completed and the post production activities are going on in full swing.

This movie was originally made in Hindi and is now being dubbed in to Telugu. The makers are planning to release both the Hindi and the Telugu versions on the same day and the confirmed release date is 20th of December this year. The official theatrical trailer was released today and was received with a thumping response. This movie is expected to have some amazing action sequences and most of the shoot took place in Chicago, USA.

Vijay Krishna Acharya is the director of this flick and Pritam has composed the music of the film. Aditya Chopra is producing this film on Yash Raj Productions.