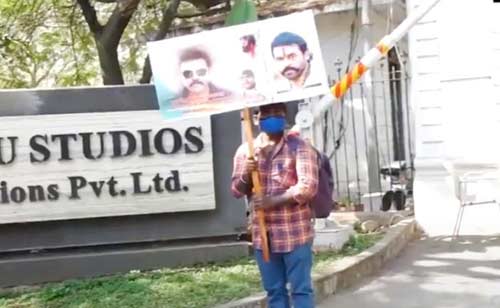 Die-hard fans of Tollywood stars often resort to extreme acts in displaying their love for their favourite stars. A few months ago, fans of Allu Arjun and Varun Tej walked over a hundred kilometres from their villages to Hyderabad to meet both the heroes.

Now, a person named Srinivas, who is a die-hard fan of hero Venkatesh, has done the same. Srinivas, who hails from Vikarabad in Telangana, has walked nearly 140 kilometres from his village to Ramanaidu Studios in Hyderabad. Unfortunately, Venky was not in town when Srinivas visited the studios.

Interacting with the media, Srinivas said that he first watched Venky’s Jayam Manadera when he was 7-years-old and became a big fan of Venky. He said that each year he celebrates Venky’s birthday in a grand manner. Srinivas informed that the Ramanaidu Studios authorities told him that they will call him and fix an appointment once Venkatesh returns to Hyderabad.