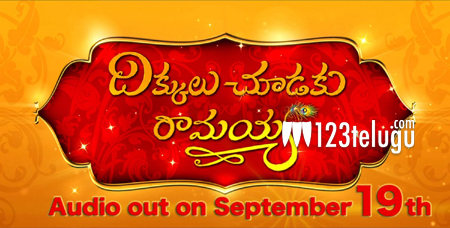 The title logo of Sai Korrapati’s production venture ‘Dikkulu Chudaku Ramayya’ has been unveiled today by the production unit. The movie has Naga Shourya as the lead while Ajay will be playing an important role.

Ace director S.S. Rajamouli’s assistant ThriKoti is going to make his debut as a director with this movie and M.M. Keeravani is composing the music. The film is said to be a sensible romantic entertainer.

Vaarahi Chalana Chitram is on a roll with continuous successful projects. After the success of ‘Oohalu Gusa Gusalaade’, Naga Shourya is hoping to score one more success with this new movie and the film is expected to release in the month of October.