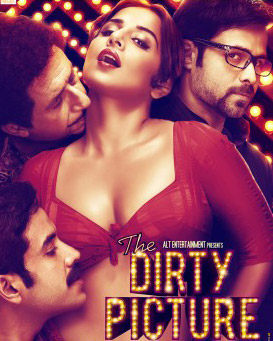 Vidya Balan’s upcoming steamy entertainer ‘Dirty Picture’ has been banned in Pakistan. The Producers planned to release the film on December 2nd in Pakistan as well but the censor board of that country denied permission after watching the movie. The move was confirmed by the Producers of the movie.

‘Dirty Picture’ is generating intense hype and publicity for its content and the reference to Silk Smitha’s life. Vidya Balan has already been seen in a couple of steamy scenes and that has really created a strong buzz around the movie.

Dirty Picture is going to release all over the world on December 2nd. The movie has also been dubbed into Telugu for a simultaneous release. Naseeruddin Shah and Imran Hashmi are the other major stars in the movie.