Dirty Picture is bound to generate controversies in South
Published on Nov 29, 2011 1:40 am IST 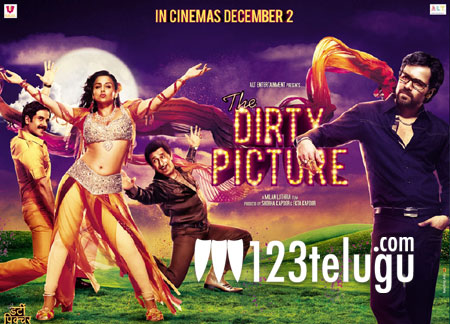 While many in South are awaiting the release of Dirty Picture, there will be more than a few who will be getting uncomfortable. Consider this. In the movie Nasseruddin Shah plays an ageing Southern Star who lusts after Silk. That’s scope for trouble. Almost all heroes that Silk acted with were ageing ones. And Silk acted with every leading southern hero from the late 70s right through the 80s. The role of Tusshar Kapoor is supposedly based on the Malayalam hero Harish who was considered to be the man in her life. And the role of Emran Hashmi is based on the role of a southern actor who, the makers of Dirty Picture allege, was actually a pimp. And then there are at least a couple of leading southern directors at whom more than a few potshots were aimed at. To add to this Vidya Balan in an interview to a leading news channel said that Silk Smitha was definitely exploited by film makers in the South, Considering all this and also considering the hero worship that southern fans have for their stars it is very safe to assume that a few feathers will be ruffled when the movie hits the screens on 2nd December.