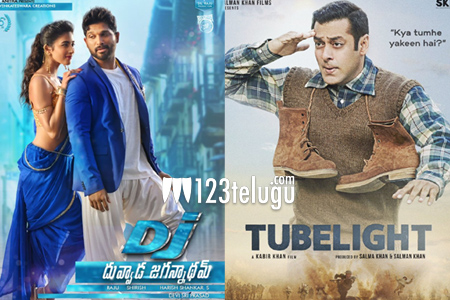 We saw how Baahubali 2 took on the box-office records set by all the top Bollywood stars a month ago. Continuing the momentum, Allu Arjun’s Duvvada Jagannadham has now beaten Salman Khan’s Tubelight on Friday.

As per the latest trade reports, Duvvada Jagannadham has collected over Rs 18 crore share from the twin Telugu states alone. On the other hand, Bhai’s Tubelight could collect only Rs 12.50 crore share worldwide on Friday.

DJ also surpassed Tubelight’s collections in North America. The film has grossed over $350K from its premieres, while Salman’s film could collect only $187K.