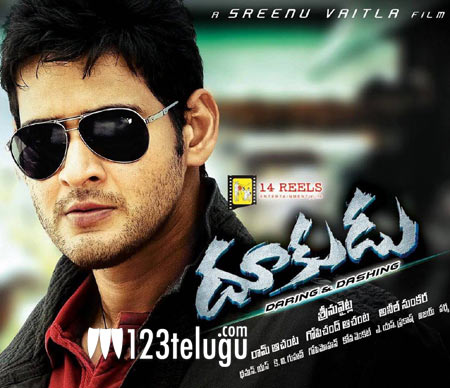 Dookudu team is extremely delighted for winning seven Nandi awards this year. Mahesh Babu, Srinu Vaitla, Prakash Raj, M S Narayana and few others won the awards in different categories. Sharing his joy soon after the announcement of Nandi Awards, Mahesh Babu tweeted, “It is indeed an honour 2win d most prestigious award of the Telugu film industry.I’d like to thank d entire team of 14 reels n my favourite director seenu vytla…wouldn’t have.been possible without him:)”
Srinu Vaitla, who won the Nandi Award for Best Screenplay, said, “I am happy that Dookudu won 7 Nandi Awards and I am all the more happy that Mahesh Babu got the award for Best Actor. He said that there’s no Dookudu without Srinu Vaitla. But I must say that there’s no Dookudu without Mahesh Babu. In the past, I had got the Best Screenplay Award for Nee Kosam and Dhee. I am happy that I have won the award for the third time.” Ram Achanta, Anil Sunkara and Gopichand who produced the film said, “We are extremely happy that our second production became one of the biggest blockbusters and winning seven Nandi Awards is like an icing on the cake. We thank each and everyone from the team and the audience for supporting the film.”