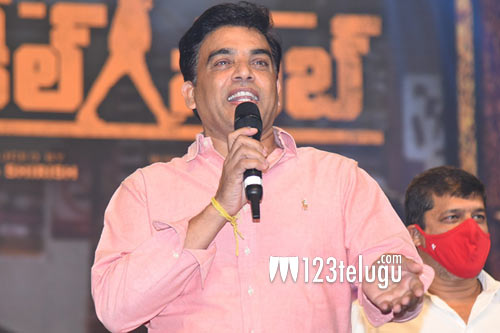 Speaking at Vakeel Saab’s pre-release event tonight, the film’s producer Dil Raju revealed that he first dreamt of making a film with Pawan Kalyan on Tholi Prema’s 100th day at Sandhya 70mm theater. He went on to reveal that he again wanted to produce a Pawan on Khushi’s 50th day function at Sandhya 70mm.

Dil Raju went on to reveal that Pawan was the chief guest along with Chiru and Naga Babu at Arya’s muhurat ceremony and that the desire to team up with Pawan got ignited inside him again. “When Boney Kapoor garu sent me Ajith’s Nerkonda Paarvai’s trailer, I could imagine only Pawan Kalyan in it. Later, when I watched the film, I wasn’t seeing Ajith but only Pawan Kalyan on screen,” revealed the star producer.

“I met Trivikram garu during Ala Vaikunthapurramuloo’s shoot and expressed my wish to cast Pawan garu in Pink’s Telugu remake. He got me Pawan’s appointment and that’s how my dream came true. I thank the writers and makers of Pink and Nerkonda Paarvai. Without them, my dream wouldn’t have come true,” saidys Dil Raju. Directed by Sriram Venu, Vakeel Saab is scheduled for release on April 9.