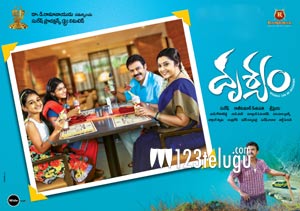 Victory Venkatesh’s latest emotional thriller Drushyam is going strong at the box office. This movie has got a strong positive talk post the release and is attracting more and more audience to the theaters. This movie is performing well not only in Andhra Pradesh, Telangana but also in overseas.

Released last week, this movie has collected 8 crores in total in Andhra and Telangana regions. In the US, it managed to collect 1.5 crores in the first 4 days. Apart from a total of 9.5 crores, the satellite rights of this film have been sold for a whopping 5.5 crores. This is probably the biggest opening for a Venkatesh film.
Per trade analysts, this movie will easily cross 15 crores in its first week itself. Sri Priya has directed this film while Meena, Nadia and Kruthika are the other actors. Suresh Babu and Raj Kumar have jointly produced this flick.