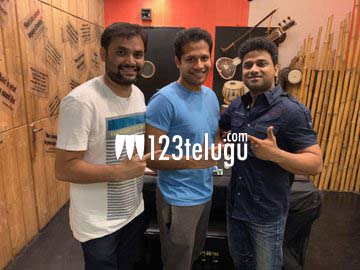 For the first time, young stars Nithiin and Keerthy Suresh have teamed up with each other for a breezy romantic entertainer titled Rang De. Tholi Prema and Mr. Majnu director Venky Atluri is directing the movie. The film’s shooting began in July.

This evening, DSP took to Twitter and share a couple of pictures with Venky Atluri and young lyricist Shreemani to announce that he has begun the music compositions for Rang De. This is the first time that DSP is joining hands with Venky Atluri.
Legendary DP PC Sreeram is cranking the camera for Rang De and Suryadevara Naga Vamsi is bankrolling the film under Sithara Entertainments banner. Stay tuned for further updates.