DSP wins hearts with his touching gesture for his legendary guru
Published on Sep 20, 2020 12:25 am IST 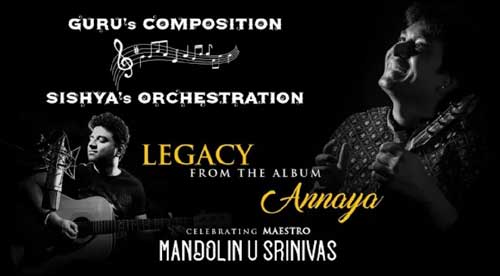 It’s well known that star music composer Devi Sri Prasad was a disciple of legendary mandolin player ‘Mandolin’ Srinivas who breathed his last in 2014. Over the last 6 years, DSP had given touching tributes to his guru on a few occasions.

In a latest, DSP took a tune composed by Mandolin Srinivas and gave it a new spin with his beautiful orchestration. DSP released the video song this morning and called this musical tribute to his guru a “dream come true.” Needless to say, the song has struck many heartstrings since its release.

Its been 6 years since my GURU, SRI MANDOLIN U SHRINIVAS ANNA left for his Heavenly Abode..
But his MUSIC is always with US❤️🙏🏻

Here is a Piece composed by HIM..
ORCHESTRATED by ME..🙏🏻