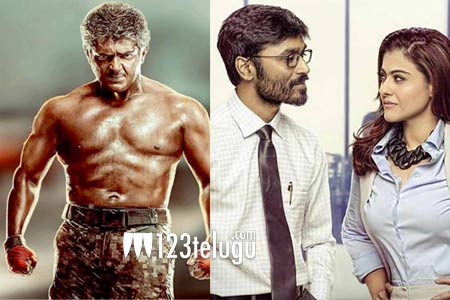 Telugu fans of Tamil stars Ajith and Dhanush were expecting to witness fireworks from their favorite heroes as the Telugu dubbed versions of Vivegam and VIP 2 released this week. However, both the movies are off to a dull start at the box-office in AP and Telangana.

Ajith’s action thriller Vivegam, Vivekam in Telugu, was heavily panned by critics and movie lovers for its lackluster script, the situation is no different with Dhanush’s VIP 2. This sequel to
Raguvaran B.Tech was termed as a half-baked attempt by critics. Both the movies are managing to rake in some moolah at the box-office thanks to the festive weekend.

However, with Arjun Reddy performing extremely well in the twin Telugu states, it’s going to be a tough ride for Vivekam and VIP 2 from Monday onwards.