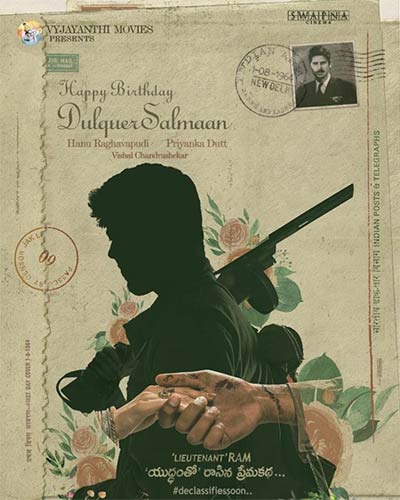 Reputed production house Vyjayanthi Movies has just announced its next project. This as-yet-untitled film features Mollywood star Dulquer Salmaan in the lead role. The makers unveiled an intriguing announcement poster this morning on the occasion of Dulquer’s birthday.

The film is set in a war backdrop in the year 1964 and it showcases the love story of an Indian Army Lieutenant named Ram. The makers are yet to finalize the film’s leading lady. The film will be directed by Hanu Raghvapudi. Vishal Chandrashekhar of KVPG and PPLM fame will compose the music. Swapna and Priyanka Dutt will be bankrolling the film under Ashwini Dutt’s presentation.