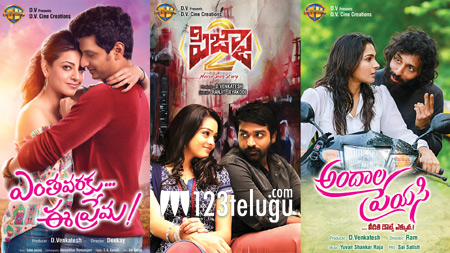 Dubbing films are commanding the current Telugu cinema market. Telugu producers are running left and right across all the corners in Tamil and Malayalam film industries to bag the dubbing rights for hit movies.

However, gutsy producer D Venkatesh of DV Cine Creations has managed to bag the Telugu rights for three big Tamil films.
Jiiva and Kajal Agarwal’s Enthavaraku Ee Prema, Vijay Sethupathi’s Pizza 2 and Andala preyasi starring Vasanth Ravi, Andrea Jeremiah and Anjali are the three films which will be brought to us by D Venkatesh.

The release dates of all these three films will be announced soon.