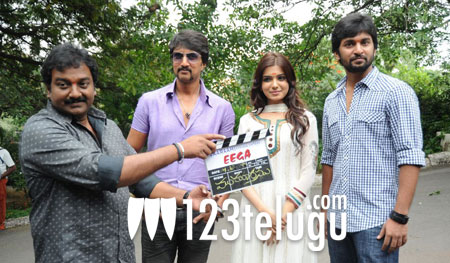 Rajamouli’s upcoming visual extravaganza Eega is in the final stages of filming. Principal shooting of the film is going to end by the end of the month. Except for some patch work, the entire film’s shooting will be wrapped in this final schedule. Tweeting about the film’s progress, Rajamouli said, “I haven’t yet worked on teasers of Eega. Busy preparing for the climax.” Since there’s a lot of post-production involved Rajamouli hasn’t spoken about when Eega might release in screens. Nani, Samantha and Sudeep are playing lead roles in this film. Sai Korrapati is producing the film. Senthil is the cinematographer and M M Keeravani is composing the music. Eega is a bilingual film and it’ll be simultaneously released in Telugu and Tamil.