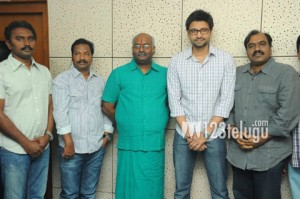 Hero Sumanth’s new film ‘Emo Gurram Egaravacchu’ has started its shoot today. The movie is being directed by Chandra Siddhartha and the script has been penned by S.S.Kanchi of ‘Amrutham’ fame

Music is being scored by M M Keeravani and Madan is producing the film. Major portions of the film will be shot in the USA. Directors S.S. Rajamouli and Sukumar were on hand to flag off the shoot.