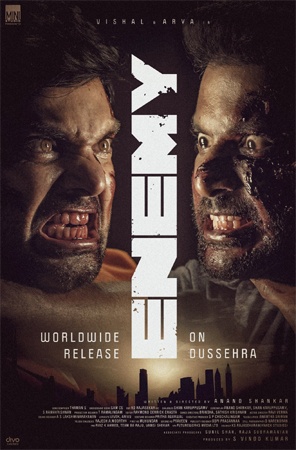 Starring Vishal and Arya, Enemy, which was released back in November 2021 has impressed audiences. Directed by Anand Shankar, the movie will soon stream on Sony LIV.

The OTT platform has announced that the action thriller will be available to stream on its platform from February 18, 2022. A special promo has been released online to confirm the same.

Having Mamatha Mohandas, Mrinalini Ravi as the female leads, the movie also has Prakash Raj in a crucial role. Those who missed watching it on the big screen can watch it from next week onwards.

Two childhood friends end up on opposite extremes of morality, and face each other in a good vs evil war. #ENEMY starring Vishal and Arya is streaming on Feb 18th only on SonyLIV. #EnemyOnSonyLIV@vishalkofficial @arya_offl @anandshank @mamtamohan @mirnaliniravi @prakashraaj pic.twitter.com/d4MOFivekX