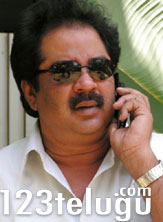 EVV Cinema, the home banner of popular director EVV Satyanarayana, is going to begin movie production again. This was confirmed by EVV’s son and popular comedy hero Allari Naresh himself. “After dad expired, both Aryan and I felt that EVV Cinema needs to be revived, as a tribute to dad”, says Allari Naresh.

The duo are planning the first picture from January 2012 and a leading hero has been approached to do the project. Allari Naresh will not be a part of this film as of now. The official Producer will be Aryan Rajesh. “More details will be announced soon”, says Naresh

EVV Cinema has delivered some very good hits earlier. Let us wish that the banner scores good success in its second innings.