Excitement builds up to another level for Pushpa’s first single
Published on Aug 12, 2021 6:47 pm IST 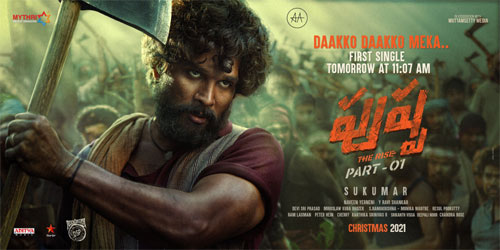 Allu Arjun is a massive star and he has found this pan-India stardom post the success of Ala Vaikunthapuramlo. So, all his movies have a wide reach, and next in line is Pushpa.

The shooting of the film is going on in full swing as of now and today, the makers released a new poster about the song that will be out tomorrow.

Titled Dakko Dakko Meka, this song will be released in five languages. DSP has scored the music for this film and he is teasing the audience with crazy-sounding in the teaser.

So, how will the song turn out and what magic has DSP and Sukumar created needs to be seen. Pushpa will release this Christmas as per the news.