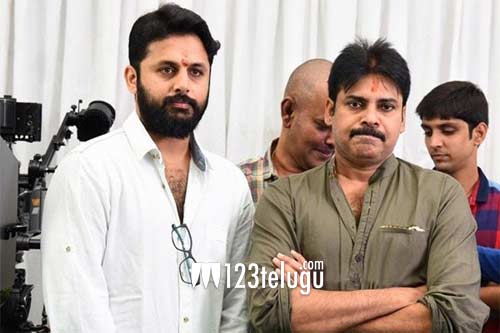 Ever since Pawan Kalyan decided to star in the remake of the acclaimed Mollywood action drama, Ayyappanum Koshiyum, there has been a lot of hype and expectations on the project. Until recently, hero Rana was said to be the prime choice to reprise Malayalam star Prithviraj’s role in the movie.

However, it’s been reported a couple of days ago that not Rana but the film’s makers are on a hunt to find another Tollywood star who will be sharing screen space with Pawan. Now, the latest buzz will leave all the fans thrilled.

Apparently, none other than Pawan Kalyan’s die-hard fan hero Nithiin is said to be under consideration for Prithviraj’s role. Needless to say, Nithiin joining the project will take the buzz surrounding the film to the next level. Let’s wait for a few more weeks to get some clarity in this regard.