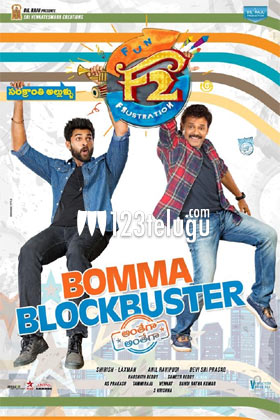 Released amid a tough competition from NTR Kathanayakudu and Vinaya Vidheya Rama, senior hero Victory Venkatesh and Varun Tej-starrer Fun and Frustration has turned out to be a huge blockbuster. The film, in its 9-day theatrical run, has collected over Rs 55.58 crore worldwide share and is aiming at a Rs 60-68 crore share finish by the end of its full run.

Thanks to its stunning performance worldwide, F2 has emerged all-time highest grossing movie in Venkatesh and Varun Tej’s careers. While Venky’s previous best was SVSC (Rs 51.72 crores), Varun’s top grosser has been Fidaa (Rs 48.53 crores). F2 is still going strong at the box-offices worldwide. The film has all the chances to end up as Tollywood’s 15th highest grossing film of all-time, beating Pawan Kalyan’s Katamarayudu.