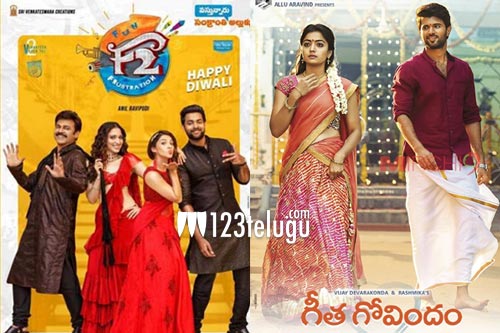 Venkatesh, Varun Tej, Tamannaah, and Mehreen starrer F2 has already become a blockbuster, and now, it has come close to surpassing an earlier record set by Vijay Devarakonda’s Geetha Govindam. Directed by Anil Ravipudi, the film was produced by Dil Raju, and it has been doing extremely well at the box office, ever since it released on January 12.

As per the latest reports, the film has collected a share of close to Rs 65 crores, and it will also cross than $2 million milestone in the US box office soon. Trade pundits are now confident that the film will collect more than what Geetha Govindam managed to collect last year. It is worth noting that Geetha Govindam had a lesser budget compared to F2, and it went on to become one of the most profitable film of all time after it released in 2018.

With F2 all set to join the Rs 70 crores (share) club soon, all eyes are on the film’s sequel. It remains to be seen when Anil Ravipudi, and the rest of the team, decide to join hands once again for the sequel.