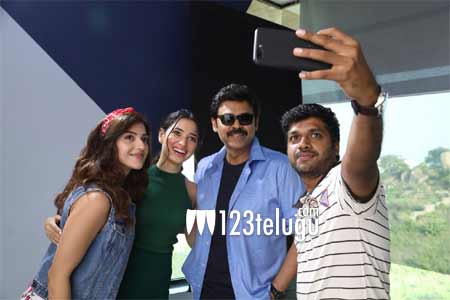 Anil Ravipudi’s upcoming film F2 – Fun & Frustration is progressing briskly. The film’s shoot began earlier this month, and the team wrapped up the first schedule earlier today. The family entertainer stars Venkatesh, Varun Tej, Tamannaah, and Mehreen in lead roles, and it looks like the entire team had a blast shooting for the film, so far.

Thanking the whole team, Anil Ravipudi shared his joy about working with each lead actor, and Tamannaah is quite excited about how the film is shaping up, so far. “F2 shoot is fun unlimited. Super blessed to be wrking on this film,” she said.

It’s also the first time that Tamannaah has teamed up with Venkatesh. Dil Raju is producing the film and it’s expected to release on January 12, 2019.

#F2 shoot is fun unlimited!!! Super blessed to be wrking on this film , yes Anil Sir will send u pics when we sisters meet @Mehreenpirzada 😂 https://t.co/Ety6tuawIe