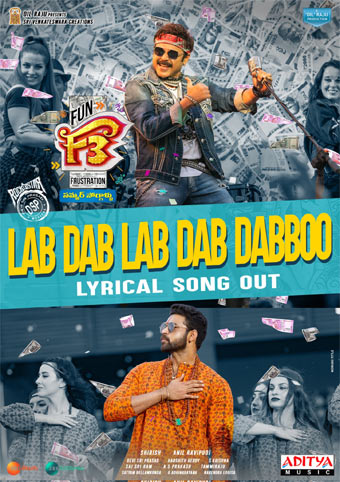 Tollywood’s upcoming multi-starer movie, F3, featuring Venkatesh and Varun Tej as the male leads, is all set to hit the screens on April 28, 2022. Ahead of that, the makers have started the promotions and as part of that, they have released the first song from the film today.

Composed by the music sensation, Devi Sri Prasad, the song, Lab Dab Lab Dab Dabboo, is all about the greatness of money. Ram Miriyala’s vocals make this song quite effective.

The song has a trendy beat and has been shot in a very stylish and extravagant manner. Bhaskarabhatla’s lyrics are the best in recent times. Venkatesh and Varun Tej appeared in multiple getups and Tamannaah also appeared in this song, which is going to be a hit.

Besides Tamannaah Bhatia, the movie also has Mehreen Pirzada as another female lead. Rajendra Prasad, Sunil, Sonal Chauhan and others are also a part of this comedy entertainer, directed by Anil Ravipudi and produced by Dil Raju.