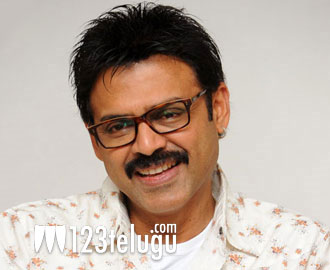 Venkatesh is one of the few actors in Telugu cinema who has delivered hits consistently throughout his illustrious career spanning more than 25 years. Right from his first film Kaliyuga Pandavulu to his recent film, Masala, he has tried his best to play different roles and his admirers have lapped it up most of the times.

Over the past couple of years, his career has taken a different turn and since he has openly declared that he’s eager to do multi-starrers, a lot of new doors have opened up for writers and directors to think in a different angle for such films. In a recent interview, when he was asked to comment upon the actors in the current generation, he said that each one of them has their own distinct style. “The best thing about Telugu cinema is the fans. They are always supportive and even if someone has delivered flops, the moment a film becomes a hit they’ll continue to support them,” he said.

His humble nature and interest in spirituality is quite well-known in the industry and also among his fans. It’s one of the several reasons why he’s admired so much. Meanwhile, Venkatesh has already signed up to play one of the lead roles in Krishna Vamsi’s next film, which also stars Ram Charan. This untitled film is likely to go on floors in January, 2014.