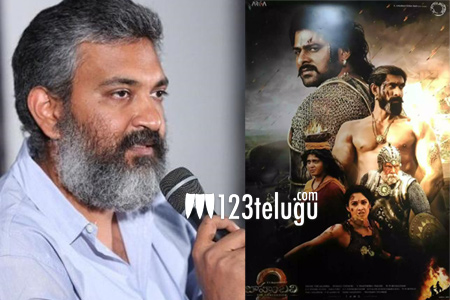 Over the past few days, the film’s makers, fans and all the parties involved with Baahubali have been anxiously​ hoping for a peaceful resolution for the film’s release issue in Karnataka.

Several members of Karnataka Rakshana Vedike have called for a statewide bandh to prevent Baahubali’s release in Karnataka. They were protesting against the film’s actor Satyaraj’s allegedly controversial comments against Kannadigas in the Cauvery River issue 9 years ago.

In an earnest appeal, Rajamouli released a video yesterday in which he spoke in fluent Kannada and requested all the Kannadigas to not jeopardize Baahubali’s release and support the film just like they did for the film’s first part.

Rajamouli’s sincere request has touched everyone including movie lovers and several members of the South Indian film fraternity. Stars like Prakash Raj and Madhavan and many others were in total support for Rajamouli and the film’s release. Let’s hope that the issue will be resolved amicably and the movie will recreate box-office history with people’s unconditional support.