Films is not everything. Life is bigger than films: Pawan Kalyan
Published on Mar 7, 2016 7:19 pm IST 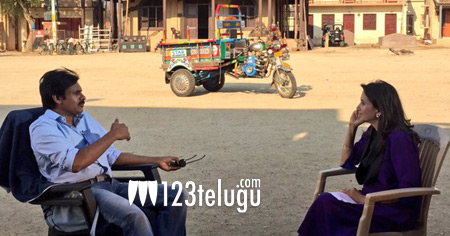 The interview took place this evening on the sets of Sardaar Gabbar Singh and Pawan spoke at length about films, politics and his personal life. The complete video interview will be uploaded on Film Companion’s YouTube channel very soon.

Pawan started off saying that he is an accidental actor and that he actually wanted to become a farmer. Pawan described his entry into politics as an effort to find his voice in real life as well. True to his aspirations, Pawan stated, “Films is not everything. Life is bigger than films,” hinting that he has bigger plans beyond films.

Pawan said that he is acting in films to sustain himself. However, the actor also said that he will give it up (acting) in a few years, but continue as a writer as he enjoys writing. Pawan concluded saying that “Do your duty and disappear” is his mantra.