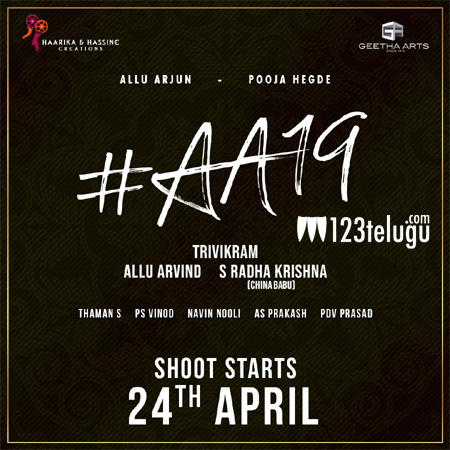 Ever since the film’s official announcement, fans of Allu Arjun and Trivikram have been patiently waiting for further updates on the Stylish Star’s 19th project. Finally, on the occasion of Allu Arjun’s birthday, the film’s makers have given all the much-awaited updates.

The Allu Arjun-Trivikram film will have Pooja Hegde as the leading lady. The film’s regular shoot will commence from April 24. Thaman is reuniting with Trivikram after Aravindha Sametha. Allu Aravind’s Geetha Arts and S Radhakrishna’s Haarika and Hassine Creations banners are jointly producing this high budget entertainer. Stay tuned for further details.