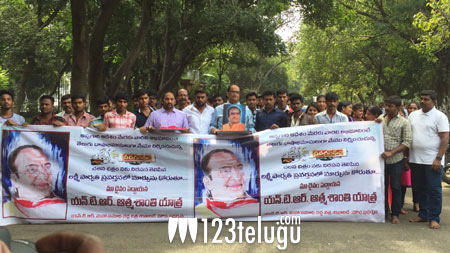 It’s well-known that as many as four movies based on the life and times of legendary actor and chief minister of erstwhile Andhra Pradesh NT Ramarao are in the pipeline. Of these, Lakshmi’s Veeragrandham has been launched this morning.

Speaking at Lakshmi’s Veeragrandham’s inaugural ceremony, the film’s director Kethireddy Jagadeeswara Reddy said that NTR’s soul has been haunting him to make a movie on his life. Kethireddy further said he will showcase Lakshmi Parvathi as a noble housewife in his movie. He went on to announce that the film will release in January.

Incidentally, Lakshmi Parvathi had earlier protested against Lakshmi’s Veeragrandham, alleging that the film is an attempt to tarnish her image.