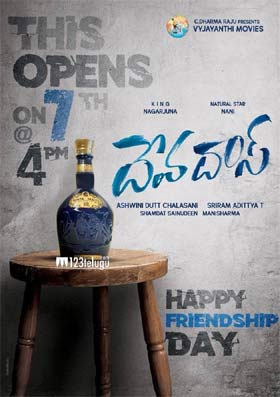 Nagarjuna and Nani are currently wrapping up their much-awaited multi-starrer, Devadas. The film stars Akanksha Singh and Rashmika Mandanna as the female leads. Now, on the occasion of Friendship Day, both Nag and Nani took to Twitter and announced Devadas’ first look launch date with an interesting announcement poster.

Devadas’ first look poster will be released on August 7 at 4 pm. In the film, Nag plays a don, while Nani will be seen as a doctor. Sriram Adittya is directing Devadas and Ashwini Dutt is bankrolling the movie. The film is going to hit the screens on September 27. Manisharma is the film’s music composer. Stay tuned for more updates on this exciting project.