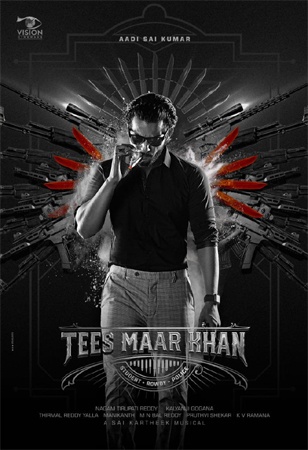 Young and promising hero Aadi Saikumar had created a special place for himself. His new film under the direction of Natakam Fame Kalyanji Gogana is fast progressing with its shoot.

Leading Businessman, Nagam Tirupathi Reddy is producing this Production No 3 under Vision Cinemas. Gorgeous diva Payal Rajput plays Aadi’s love interest, while hero Sunil will be seen in an important role in this film.

On the auspicious occasion of Dussehra, the makers have revealed the film’s title, besides releasing the first look poster. The film is titled Tees Maar Khan and it’s a perfect one, given Aadi plays an action-packed role in this high voltage action drama.