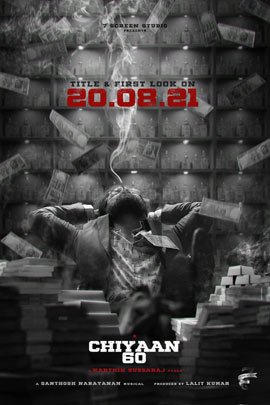 The first look of Kollywood star Chiyaan Vikram’s highly-anticipated 60th film will be out on August 20. The film is going to be extra special for Vikram, as it also features his son Dhruv Vikram in a lead role. Vikram will be seen in an ultra cool and stylish look in the movie.

The announcement poster of this as-yet-untitled film, touted to be a crime thriller, raises curiosity as it features Vikram sitting in the midst of stacks of currency notes. Karthik Subbaraj has directed the film which also has Bobby Simha, Simran and Vani Bhojan in lead roles. Lalith Kumar is bankrolling the project, while Santhosh Narayanan is composing the music.