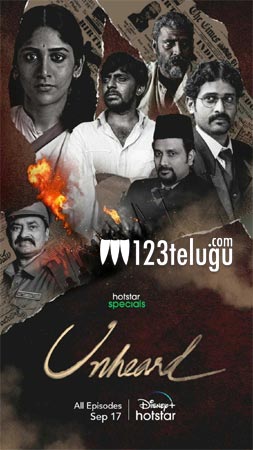 Popular OTT platform Disney+ Hotstar is foraying into the Telugu original content space with its maiden Telugu original series, Unheard. The series’ first look poster was unveiled earlier today. “As a nation seeks to be born, the common men and women of Hyderabad stand witness to the largest human struggle to break the chains of bondage.” This is the main theme of Unheard.

Unheard features an ensemble cast comprising of Srinivas Avasarala, Baladitya, Chandani Chowdary, Priyadarshi, and Ajay. The series has been directed by Aditya KV and produced by the team at Ellanar Films. All episodes will be streamed on Disney+ Hotstar on September 17th. With such an intriguing theme and a talented cast, Unheard is sure to make a mark upon its digital premiere.