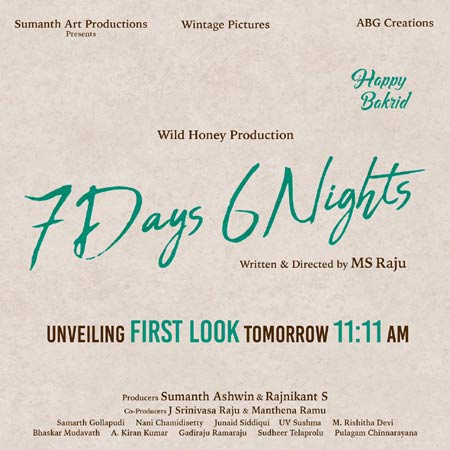 On the festive occasion of Bakrid, the makers of the upcoming youthful entertainer, 7 Days 6 Nights, released a special announcement poster. The cool and breezy poster reveals that the film’s first look will be out tomorrow (July 22) at 11:11 AM. The film is being directed by senior producer-director MS Raju.

7 Days 6 Nights features a bunch of newcomers in lead roles. The film is being produced by none other than MS Raju’s son and popular hero Sumanth Ashwin under Wild Honey Productions banner. A 14-year-old youngster named Samarth Gollapudi is scoring the soundtrack.

Rajinikanth S is co-producing the film in association with J Srinivasa Raju and Manthena Ramu under Wintage Pictures and ABG Creations banners. Stay tuned for the first look.