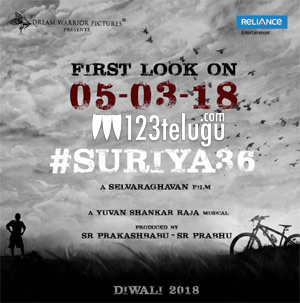 It’s been not even a month since hero Suriya’s highly-anticipated 36th film had a grand launch. Already, the film’s first look is gearing up for its release.

As per the latest updates, Suriya36’s first look poster will be out on March 5. Maverick director Selvaraghavan is helming the movie, while Sai Pallavi and Rakul Preet are romancing Suriya. Dream Warrior Pictures, the noted production house that bankrolled Khakee’s Tamil version, is producing this exciting project.

Hotshot music composer Yuvan Shankar Raja is scoring the soundtrack for this as-yet-untitled movie. The film is slated for Diwali release.