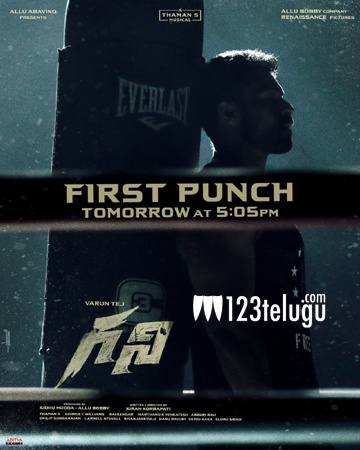 Hero Varun Tej’s much-awaited boxing drama, Ghani, is gearing up for its theatrical release soon. The film’s makers have just unveiled a special poster to announce that a short glimpse of Ghani’s ‘first punch’ teaser will be out tomorrow, October 6 at 5:05 PM.

In Ghani, Varun Tej will be seen as a boxer. The Mega hero trained under Olympic boxers in the US and Indian boxing champions. The film introduces Bollywood starlet Saiee Manjrekar to Tollywood. Kannada star Upendra, Bollywood actor Suniel Shetty and yesteryear heroine Nadhiya will be seen in crucial roles in this Kiran Korrapati’s debut directorial.

Ghani is being produced by Allu Aravind’s elder son Allu Venkatesh and Sidhu Mudda. Thaman is the music composer. The film is scheduled for release on November 4.