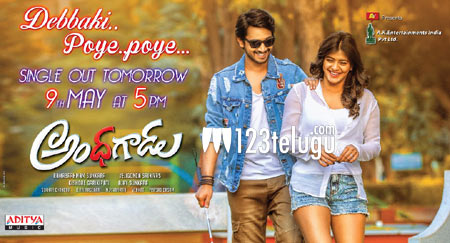 The team of Young stars Raj Tarun and Hebah Patel-starrer Andhagadu is highly confident about the movie. The film’s producer Anil Sunkara even said that Andhagadu will be the best film from his banner till date.

Meanwhile, the film’s first single, ‘Debbaki poye poye’ will be​ released on the 9th evening at 5 pm. Sekhar Chandra is the film’s music composer. Raj Tarun will be seen as a visually challenged man in this romantic drama.

Popular story writer Veligonda Srinivas is making his directorial debut with this movie. Andhagadu is slated to hit the screens on May 26th.