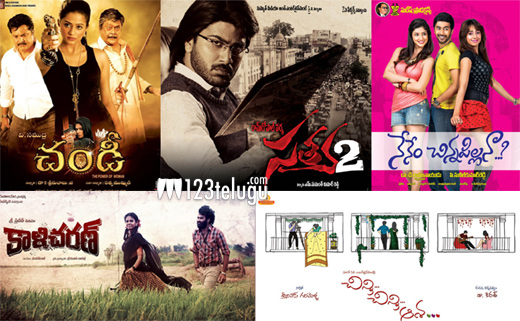 There was a time in August and September, when lot of low budget movies were hitting the screens and multiple movies were releasing on the same day. With the release of AD, things have changed as big ticket films started releasing.

Now that most of the big budget movies have released and release date of ‘Masala’ already announced, makers of low budget movies have opted for 8th of November as their release date and as of now five movies are scheduled to release on the same day. All the five movies were supposed to release on an earlier date and were postponed due to various reasons. Chandi, Nenem Chinna Pillana, Kali Charan, Chinni Chinni Aasa and Satya 2 are the movies which will be releasing this Friday.

It is always better to space out between releases and we will have to wait and see if any of the above movies will be rescheduled for the release on a later date.