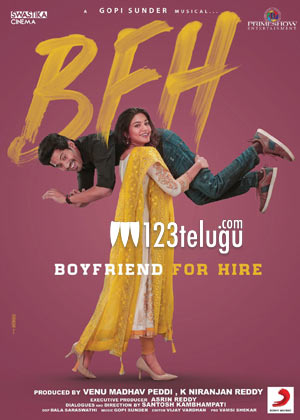 The first look poster for young hero Viswant Duddumpudi and debutant Malavika Satheeshan’s upcoming romantic comedy, Boyfriend For Hire, is out. The first look is fun and promises a variety concept in the film.

Boyfriend for Hire is being directed by Santosh Kambhampati. The film’s shooting is complete and the film is getting ready for release. Pooja Ramachandran plays a key role in the movie. Venu Madhav Peddi and K Niranjan Reddy are jointly producing the film under Swastika Cinema and Prime Show Entertainment. Gopi Sundar is scoring the music.