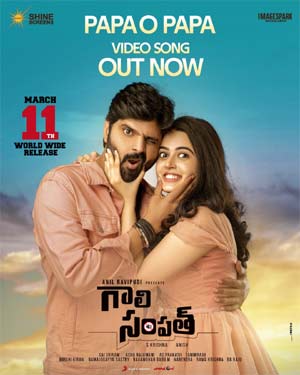 Papa O Papa has been penned by Ramajogayya Sastry and crooned by Benny Dayal, Ben Human and Anudeep Dev. Young composer Achu has composed the song. Directed by Anish Krishna, Gaali Sampath’s screenplay has been penned by Anil Ravipudi, who is also presenting the film along with offering direction supervision.

S Krishna, who wrote Gaali Sampath’s story, has also produced it along with Sahu Garapati and Harish Peddi under Imagespark Entertainment and Shine Screens banners. Gaali Sampath is opening in cinemas on March 11.