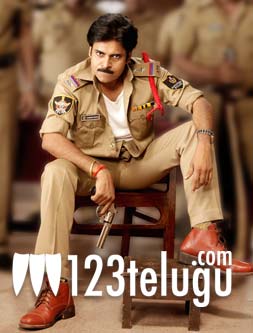 Power Star Pawan Kalyan’s mass masala entertainer Gabbar Singh is set in the village of Kondaveedu. The movie is an official remake of the Bollywood blockbuster ‘Dabangg’ but major changes have been made to the script to suit our Telugu nativity and Pawan Kalyan’s image. Kondaveedu has a special place in the hearts of mega fans.

The first look of Pawan Kalyan in Gabbar Singh was released today and fans are extremely happy. The movie is being readied as a full fledged commercial entertainer that will showcase Pawan at his absolute best.

Harish Shankar is directing this movie and Ganesh Babu is the producer. Shruti Haasan is playing the female lead in this movie. Devi Sri Prasad is scoring the music. The movie is expected to hit the screens on April 27th 2012.