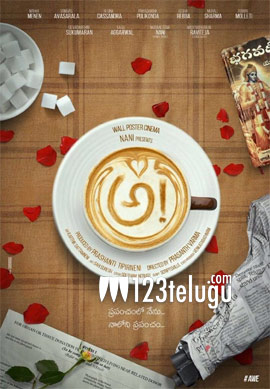 It’s been already reported that hero Nani is producing a film being directed by debutant Prasanth Varma. The film’s first look poster and title logo have been unveiled this evening. The film has been interestingly titled Awe.

What’s more exciting about this movie is that it features a galaxy of stars. Kajal Aggarwal, Nitya Menen, Eesha, Regina Cassandra and Srinivas Avasarala etc are part of this movie, while Nani and Ravi Teja are giving a voiceover. Baahubali costume designer Prashanti Tirpirneni is co-producing the movie under Wall Poster Cinema banner.