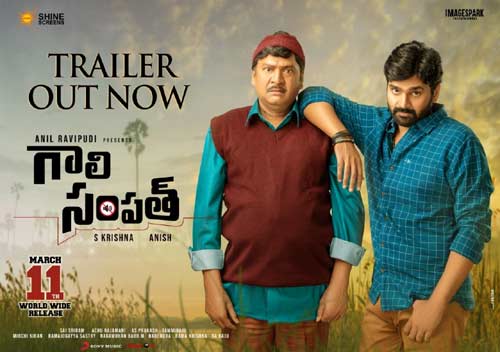 Gali Sampath is a film that has been promoted a lot as it has a story by star director Anil Ravipudi. The trailer is out today and it looks really interesting.

Rajendra Prasad is shown as this man who stammers and everyone makes fun of him. Meanwhile, Sree Vishnu is playing his son who has issues with his father.

The setup, comedy generated through Rajendra Prasad’s character is very good. Also, the conflict point of the father trying to dominate his son to achieve his dreams looks quite good.

The slight suspense factor as to why Rajendra Prasad is stuck in a mud pit also raises curiosity. Anil Ravipudi has given a wonderful script and screenplay for this film and the trailer is proof.

The film is directed by Anish and he has managed to make things exciting with his shot-making. Gali Sampath will be out on March 11th.