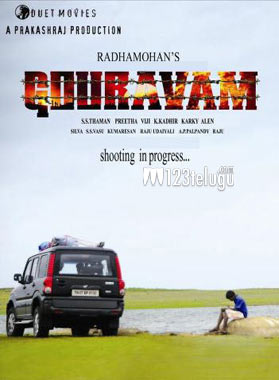 Radha Mohan’s upcoming bilingual film Gauravam is in last leg of shooting. According to the latest reports, the entire film’s shooting is expected to be wrapped up by November 12. Currently, some crucial scenes are being shot on the entire cast of the film. Allu Sirish is making his acting debut with this film which is said to be a social drama. Yami Gautam is playing the lead role opposite Gauravam. Brahmaji, Nassar, Prakash Raj and Sri Charan are playing important roles. Prakash Raj is producing the film on Duet Movies banner. Preetha is the cinematographer and S S Thaman is scoring the music. The film is likely to release in January, 2013; however, Radha Mohan and Prakash Raj are going to take a call soon on the film’s release date depending on several other films which are going to hit the screens during Sankranthi.