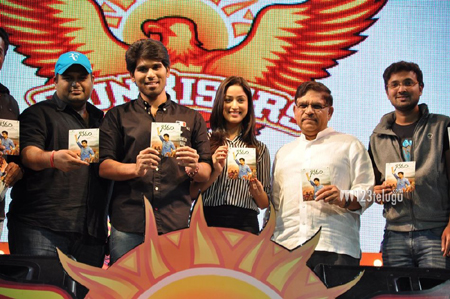 The audio of Sirish, Yami Gautam starrer Gauravam was launched a little while ago at the IPL match between Sunrisers Hyderabad and Pune Warriors in Uppal Stadium, Hyderabad. Nagendra Babu launched the audio and the ceremony was also graced by Prakash Raj, Allu Arvind, Chandrabose, Thaman, Geetha Madhuri, apart from Sirish and Yami Gautam.

Radha Mohan has directed this bilingual film which will hit the screens on April 19. Prakash Raj has produced the film apart from playing a crucial role. Yami Gautam will be seen as a young lawyer and Sirish plays a city boy who is shocked to see the customs prevailing in a village. Gauravam is said to be based on the theme of honour killings. Thaman has scored the music and Preetha is the cinematographer.