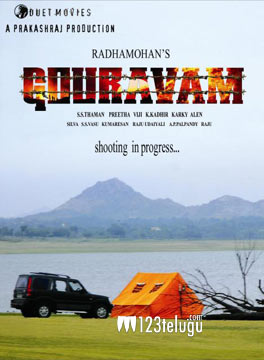 The first look and teaser of Allu Sirish’s upcoming film Gauravam was unveiled today, on the eve of Allu Arjun’s 10th anniversary as an actor. So far, the film’s promos were aired only in Tamil and today, Allu Sirish and Prakash Raj officially released the Telugu version’s teaser. Talking about the film, Allu Sirish said, “One can have affinity towards own caste, religion : but not at expense of humanity. Ide maa “Gouravam” movie undercurrent theme.” Apart from this, buzz is that the film also deals with honour killings. Radha Mohan has directed the film and Prakash Raj has produced it. Yami Gautam is playing the lead role opposite Allu Sirish. Thaman has scored the music and the film reportedly had just two songs. Preetha is the cinematographer. The film is slated to release in April.