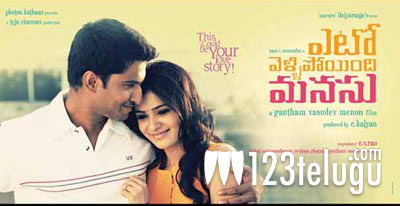 Gautham Menon has the reputation of being one of the finest contemporary filmmakers and when it comes to making romantic films, there are very film directors today who can match his style. So, it came as a big surprise for many when he went gaga over Nani, who’s acting in Yeto Vellipoyindhi Manasu. The film, which is currently being shot in Chennai, is in the last leg of shooting. Sharing his thoughts about Nani, Gautham Menon tweeted, “Nani is a pleasure to work with.. Will do a film with him anytime given the chance..With nani,what struck me was his confidence. Revelation- nani,the most confident actor.” Not only that, Gautham Menon also revealed that he has requested both Nani and Jiiva, who’s reprising the lead role in YVM’s Tamil version – Neethane En Ponvasantham. No wonder Nani was all smiles when he read these tweets from one of his favourite directors. “Simple film, beautiful music, very good actors, Jiiva,nani and Samantha. Adithya too actually. Great experience for me. Loved every minute,” Gautham Menon concluded. The film boasts of music by Ilayaraja and MS Prabhu, Om Prakash are the cinematographer. C Kalyan is releasing the film in AP and it’s expected to hit the screens in October, if all goes well.