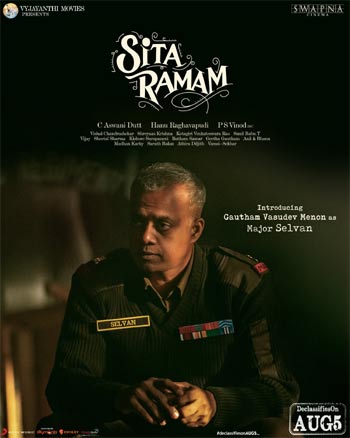 Reputed director Gautham Vasudev Menon has started taking up acting roles these days. He is being seen in more films of late and he is stunning the audience with his performance and unique mannerisms. Today the makers of Sita Ramam which stars Dulquer Salmaan in the lead role, have revealed the first look of Gautham Menon from the film. He is introduced as Major Selvan through the character poster in which he looks fabulous.

Sita Ramam is an epic love story set under a war backdrop. Mrunal plays the leading lady in this project which has Rashmika Mandanna, Sumanth, and Tharun Bhascker in other vital roles. Produced by Ashwini Dutt under the Swapna Cinema banner, the film is helmed by Hanu Raghavapudi. The music is provided by Vishal Chandrasekhar and it is scheduled for a grand theatrical release on August 5th