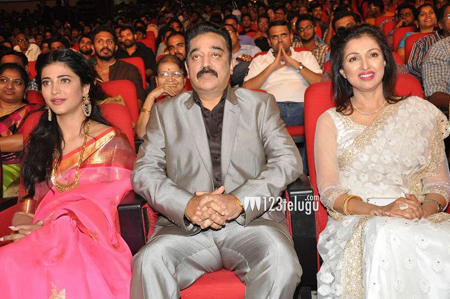 Kamal Hassan’s ‘Uttama Villain’ is gearing up for a huge release soon. The audio of the Telugu version is being launched currently in Hyderabad and the entire star cast is present on this occasion.

This film is special for many reasons as it has Kamal Haasan’s close friend Gauthami who has designed the costumes. Speaking at the launch, Gauthami said that a lot of hard work has gone into the making of this film and she had done extensive research for the costumes as some part of the film is based in the pre-independence era.

Kamal Haasan plays a double role in the film, and Gibran has scored the music. Directed by Ramesh Aravind, Uttama Villain is slated for a April 10th release.