Get ready for a spectacular first look of Anushka’s Bhaagamathie
Published on Nov 6, 2017 2:38 pm IST 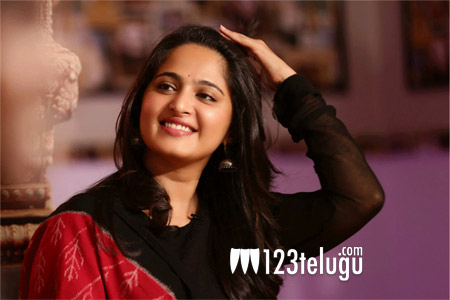 123telugu had reported yesterday that the highly-anticipated first look poster of Anushka’s upcoming horror-thriller, Bhaagamathie, will be released at 5:55 PM today on the eve of the star heroine’s birthday. As per our sources, the first look has come out spectacularly.

The poster will have brownish vibes to it. The background and even Anushka’s costume will be in brown color, the significance of which will be revealed once the film releases. The impactful poster showcases Anushka holding a weapon in one hand, while the other hand is nailed to a cross.

Bhaagamathie’s sound effects work is underway at the moment. Anushka will be seen in the role of a fearless IAS officer. Malayalam stars Jayaram and Unni Mukundan play important roles in this movie. Pilla Zamindar fame Ashok has directed Bhaagamathie and leading banner UV Creations has bankrolled it. The makers are planning to release the movie for Sankranthi.